10 foods you must try during your Vietnam trip

The most popular among Vietnamese dishes is the one and only – “pho” which is also the country’s de-facto national dish. It is usually also the first dish foreigners talk about when Vietnamese food is mentioned. In 2011, CNN also ranked this noodle-dish as one of the most delicious foods in the world.

However, Pho is just one of many, many, MANY noodle soups in Vietnam. From a strictly linguistic standpoint, phở refers to the rice noodles, not the soup itself. But it’s become synonymous with the staple soup served with various meat parts (usually beef or chicken), bean sprouts, lime wedges, the essential greens (basil, mint, cilantro, and onions), and whatever chili sauce and fish sauce you need to doctor up the broth to your liking.

It’s cheap, tasty, and especially popular for breakfast in Hanoi. The northern-style pho in Hanoi is typically defined by a clear broth whereas the southern-style broth tends to be slightly sweeter, murkier from added sauces, and popping with more herbs and other garnishes. 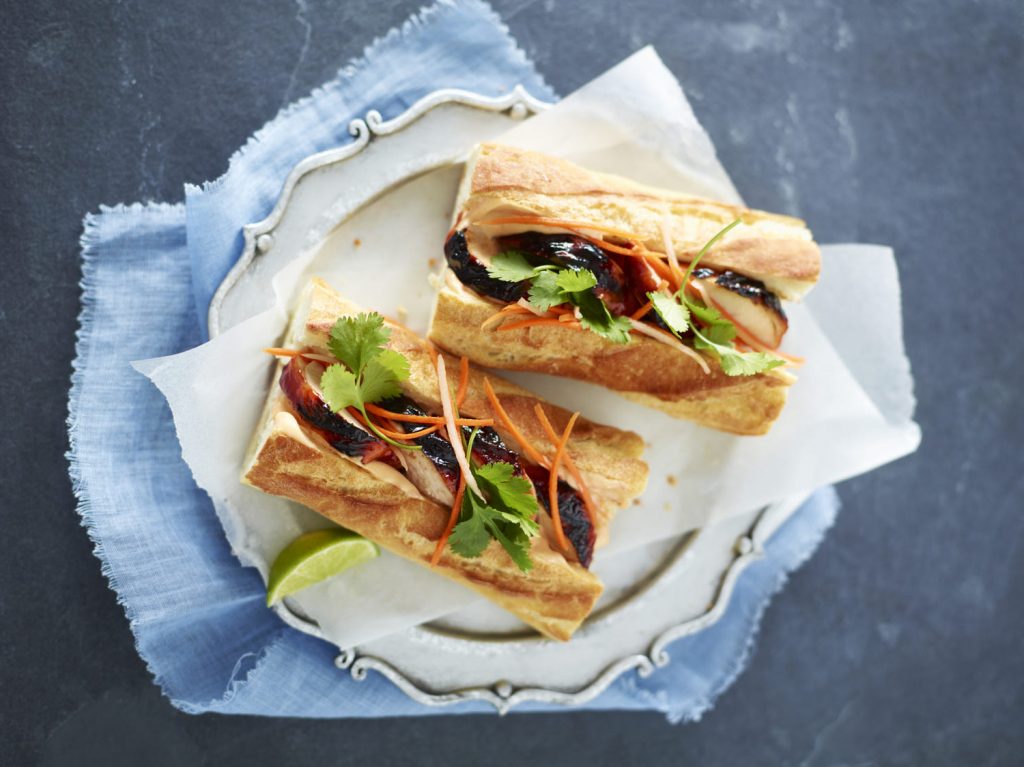 Once described as “One of the world’s finest sandwiches” by BBC, banh mi is addictive thanks to the uniqueness lying not only within the crispy French-influenced baguettes but also in the flavor packed, savory Viet fillings. These signature baguettes are usually stuffed with a meat of your choice (grilled pork, bbq beef, or shredded chicken), vegetables, a variety of sauces, and my most favorite part, an extra sunny side up egg. Available at almost every street corner, banh mi is a perfect choice if you are in a rush or just want to temporarily appease your hunger.

Vietnam has a number of noodle dishes and some of them represent a part of the country. If Hanoi is represented by bun cha and Hue by bun bo, then bun rieu is seen as the most suitable representative for the South. Consisting of crab and rice noodles, bun rieu is a well-known traditional dish and in 2012, CNN named bun rieu of Vietnam as one of the most attractive dishes in Asia. 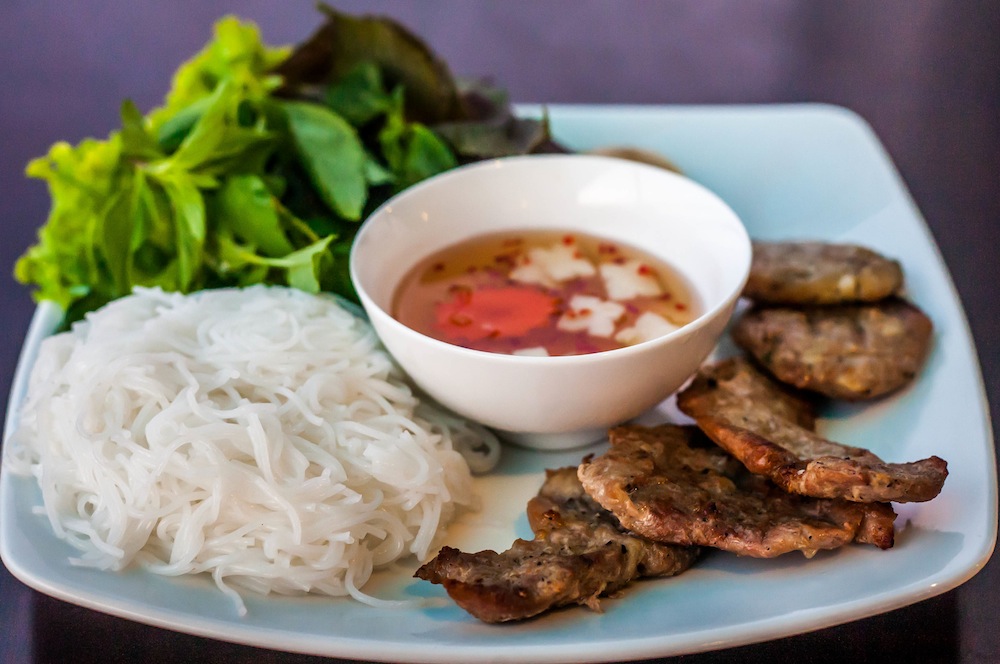 Bun cha is definitely a must-try dish when you want to have a better understanding of the national cuisine. Originated in Hanoi, the capital of Vietnam, bun cha is served with grilled fatty pork (cha) over a plate of white rice noodle (bun) and herbs with a side dish of slightly sweet sauce.The strong flavor of the pork, combined with the sweet & sour sauce and fresh vegetables create a taste that is more than awesome.

President Obama had a great time enjoying Bun Cha during his visit to Vietnam back in May 2016. 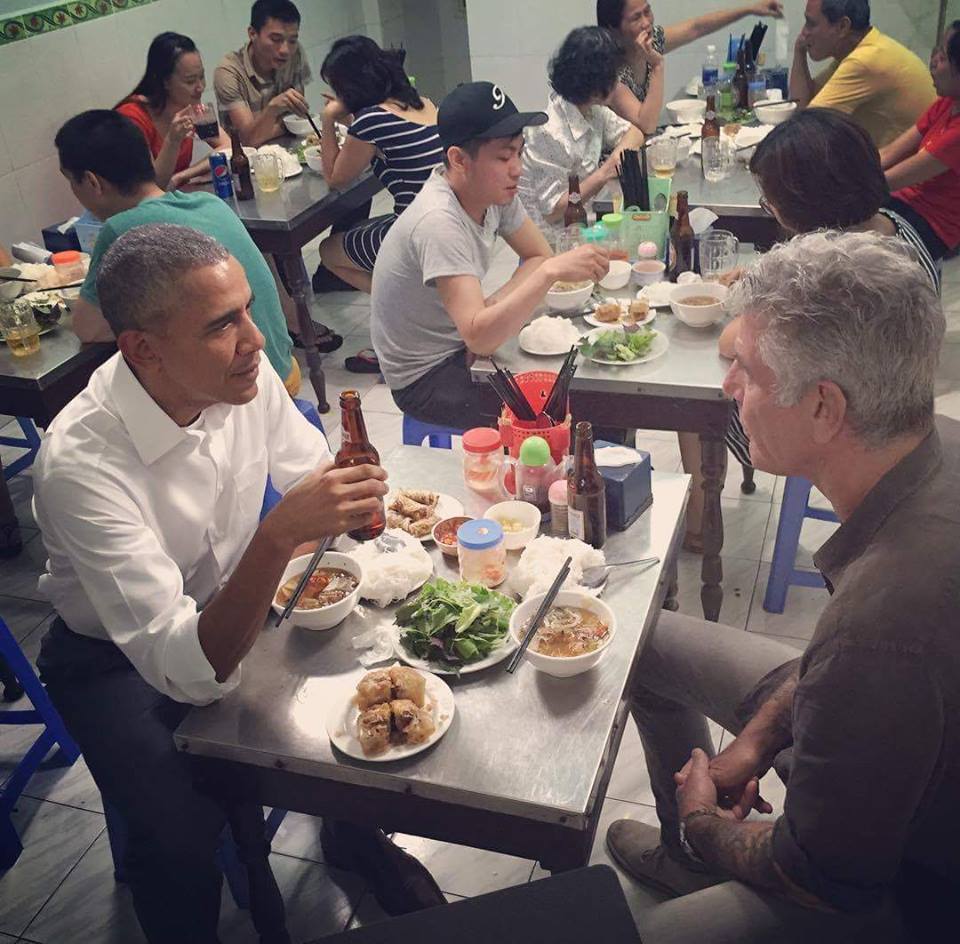 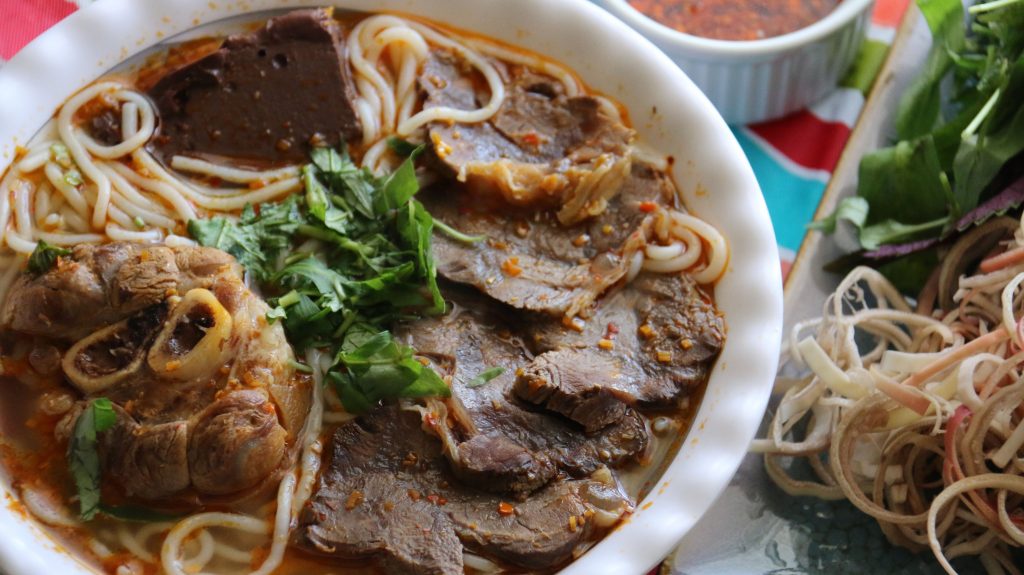 In this list, we recommend three kinds of bun and the last one on the list is bun bo Hue. This type of noodles originated in Hue, the former capital of Vietnam and like other dishes that originated from the region, bun bo Hue is really sophisticated in flavor. The broth is prepared by well-simmered beef bones and beef shank with lemongrass and then seasoned with fermented shrimp sauce and sugar. Later, very spicy chili oil is added during the cooking process. 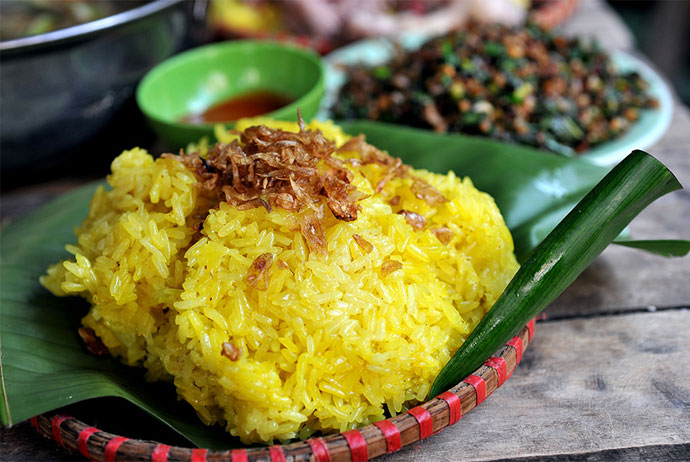 As simple and convenient as banh mi, xoi (Vietnamese steamed sticky rice) is our next on-the-go eating suggestion. Walking along the streets in any Vietnamese city, you will easily encounter female vendors carrying bamboo poles with hanging baskets at both ends, skillfully balanced on their shoulders. Many of these women make their living with daily sticky rice baskets.

Regarding its taste, there are basically two types of xoi: sweet version and savory version. Skillfully wrapped in a banana leaf, topped with grated coconut, mashed mung beans, and delicious sesame seeds, xo isweet version is definitely a good choice as a non-meaty option. Yet, if you like a more savory dish, then xoi ga (chicken one)  should be bought. 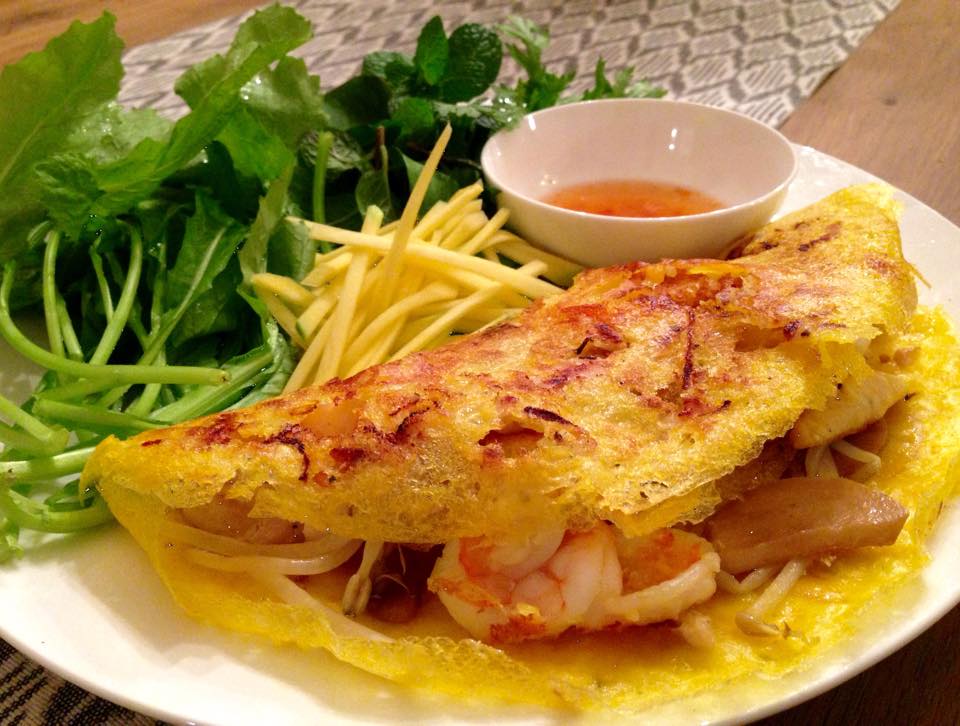 Vietnamese cuisine is more than noodle-based dishes, and banh xeo is one of the hidden gems.

Banh xeo literally means “sizzling cake” in Vietnamese. “Banh” means cake while “xeo” is an onomatopoeic word alluding to the sizzling sound the batter makes when it hits a hot frying pan. The cakes are more like crispy crepes made with rice flour, coconut milk, and stuffed with shrimp, pork, and bean sprouts. The pancake then is wrapped up with lettuce and herbs and dunked in a spicy sauce before being eaten. For your information, it is the turmeric in the ingredients that gives such an eye-catching yellow color to these pancakes. 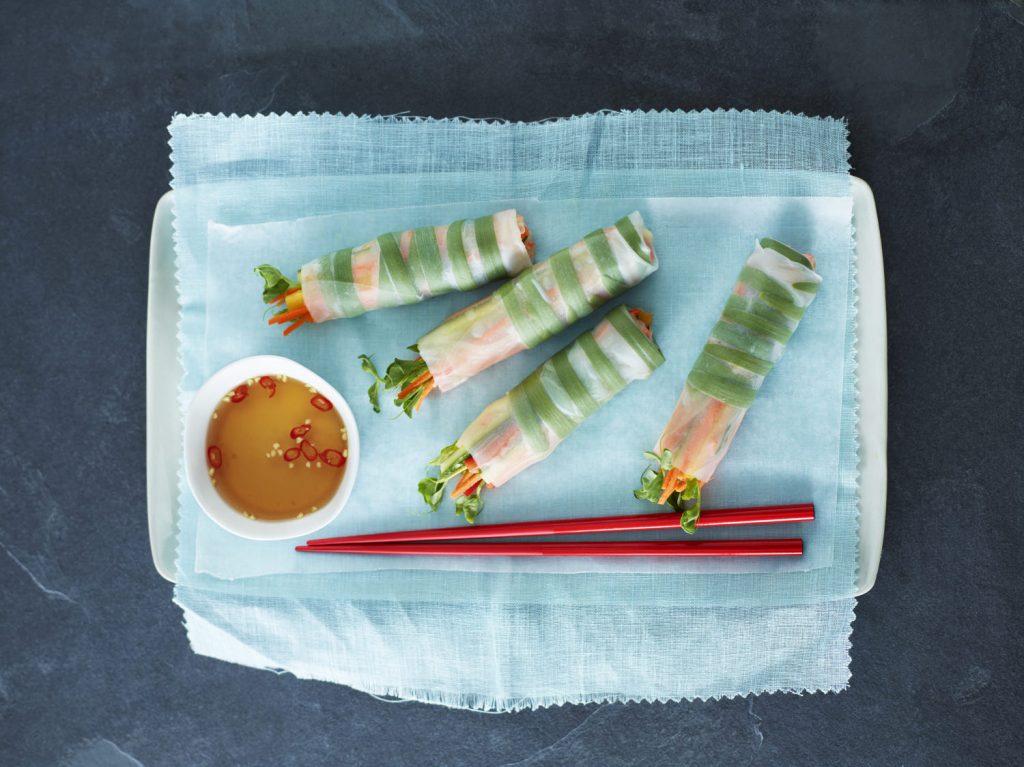 Not to be confused with your traditional egg rolls, these are different in that they’re not fried but still equally delectable! These come in varieties of ingredients but my favorite spring rolls are the grilled pork (nem nướng̣ cuốn – image shown).

Dip it in peanut sauce, and your tastebuds will go on the ride of your life!

Travelers come to Vietnam with an intention of seeing its surreal landscapes of which the country has no shortage. However, your itinerary of Vietnam is undoubtedly incomplete if you do not make it a priority to eat the local dishes mentioned above.

This unheralded and affordable noodle dish is a Quang Nam specialty. Ingredients vary by establishment, but expect to see a simple bowl of meat noodles enlivened by additions like flavorsome oils, fresh sprigs of leaves, shrimp, peanuts, mint and quail eggs. 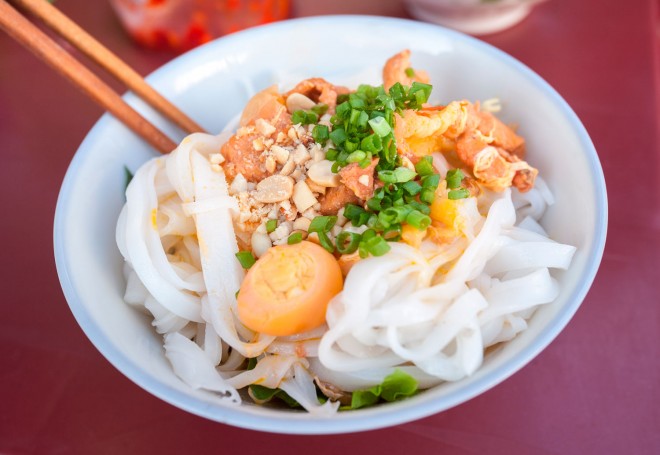 Steamed rice cake-like dishes. So soft and delicate, chef ladled each scoop of the rice flour-based batter onto the steamer, covering it with a lid for a matter of seconds, then carefully transferred the gossamer-thin sheets with a bamboo stick onto a tray to be filled with minced mushrooms and pork. Each bite is topped with deep-fried shallot bits and must be dipped into that  sauce. 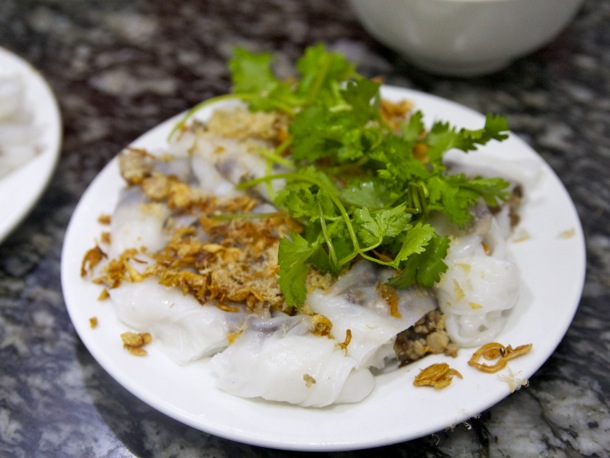 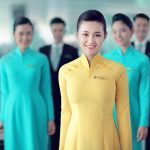 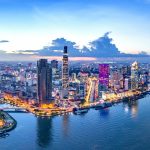 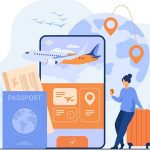