“I’m going to Vietnam October but friends said the weather may not be good”. Tell me Vietnam weather in October 2020!

Overall: The weather in October is great for visiting the North of compared to the Middle and the South. In fact, the rainy season starts but normally rains in the end of October.

Weather in the North of Vietnam in October 2020
Hanoi’s weather will not make you down, the average temperature is around 20˚C and so stable. In particular, the lowest temperature is around 11˚C from afternoon and the highest is approximately 28 ˚C. Unlike in the Middle and the South, Hanoi becomes beautiful and romantic during this month. The average sunshine hour is around 11 hours. It is forecasted there are only 2 rainy days: 27th and 28th October 2020.

In fact, Hanoi’s climate is stable compared to other cities in Vietnam during this month. There is no torrential rain and strong wind.

Mai Chau – Hoa Binh’s climate is a bit warmer compared to Hanoi in this month. Consequently, the highest temperature is about 27˚C and the lowest one is roughly 18˚C in this month. However, the rainy days are expected up to around 6-7 days.

Ban Gioc – Cao Bang: surprisingly, Ban Gioc is one of the warmest during this month. In specific, the highest temperature is approximately up to 30˚C and the lowest one is about 19˚C. It rains around 3-5 days. Tourism is busiest during October due to nice weather so hotel’s price may be a bit higher.

Weather in the Middle of Vietnam in October 2020

Da Nang: this year, Da Nang is estimated warmer compared to last year. However, the autumn is typically a bit cold of the year. The highest temperature is around 27˚C and the lowest is roughly 22 ˚C. Also, the rainy day is around 10-11 days.

Cham Islands – Hoi An: it is still warm but it is rainy season. The highest temperature is around 28 ˚C and the lowest is around 23˚C.

Weather in the South of Vietnam in October 2020

Ho Chi Minh: the rainy season starts from October in the Southern. Ho Chi Minh is estimated up to 15-17 rainy days in average. The average temperature range is from 22˚C to 31˚C.

Ideal destinations for Vietnam trip in October | Must check-in places

Mai Chau – Hoa Binh located in the West of Hanoi, Mai Chau is connected between Moc Chau- Son La and Pu Luong- Thanh Hoa. It is away from Hanoi around 150 Km and takes roughly 3-4 hours by Car or Motorbike respectively.

What to do after getting there? It is a valley covered by four mountain surrounding so the air is peaceful and clean. Therefore, it is ideal place for walking and recycling. Also, you will have opportunity to explore the unique life of Thai-ethnic people live in there.

Besides, you can discover Mo Luong cave and Chieu cave there and no need to say you will be surprised by the magnificent beauty, sparkling illusion inside the caves.

Ban Gioc – Cao Bang: Ban Gioc waterfall festival is celebrated on 5th and 6th October every year. Amazingly, Ban Gioc is voted as the fourth largest waterfall in the world and surrounded by lush jungle.

Hanoi: in Vietnam, there are so many famous songs about the autumn in Ha Noi. Coming to Ha Noi during this time, you can enjoy the mild climate and blue sky here. Also, autumn is also the season of Cốm or the green rice which well known as one of the famous dish of Ha Noi. 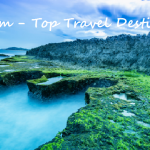 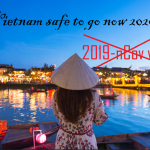